Differentiation of tooth size and shape within the jaw (i.e. heterodonty) is an expected pattern in the majority of Neoselachii sharks. Various forms of heterodonty may be observed within an individual set of jaws, which can be the result of tooth position (monognathic), upper or lower jaw position (dignathic), tooth file or developmental position (ontogeny), or between male and female in sex specific differences (gynandric). Heterodonty patterns result from natural selection as a functional linkage tied to feeding niche for both feeding performance and dietary diversity. However, the types and/or degree of heterodonty present in Devonian sharks such as Cladoselache and Ctenacanthus have not previously been discussed or quantified in the literature. The objective of this study was to analyze a number of associated dentitions from representatives of these two genera, all collected from the Cleveland Shale Member of the Ohio Shale (upper Famennian; Upper Devonian), to test for, and quantify, various types of heterodonty within and across taxonomic lineages of early cladodont sharks. Geometric morphometrics and linear measurements were used to describe tooth shape and resulting axes and measurements were regressed with jaw position, tooth file position, and upper versus lower jaw to test for differentiation associated with various types of heterodonty. Teeth from Cladoselache and Ctenacanthus dentitions that were examined did not show any variation in tooth shape consistent with heterodonty. However, tooth size did vary slightly with jaw position and the presence of symphyseal teeth at the lower jaw symphysis does indicate differentiation between upper and lower jaws. Furthermore, the long period of tooth retention characteristic of these genera create a record of ontogenetic heterodonty within a tooth file observable as an increase in tooth size lingually. Although tooth shape did not significantly co-vary with jaw position in either taxa, significant morphometric differences between the two genera were evident. These findings strengthen the taxonomic validity of the genera and recognized species within these genera and provide further insights into the niche of these Devonian sharks. 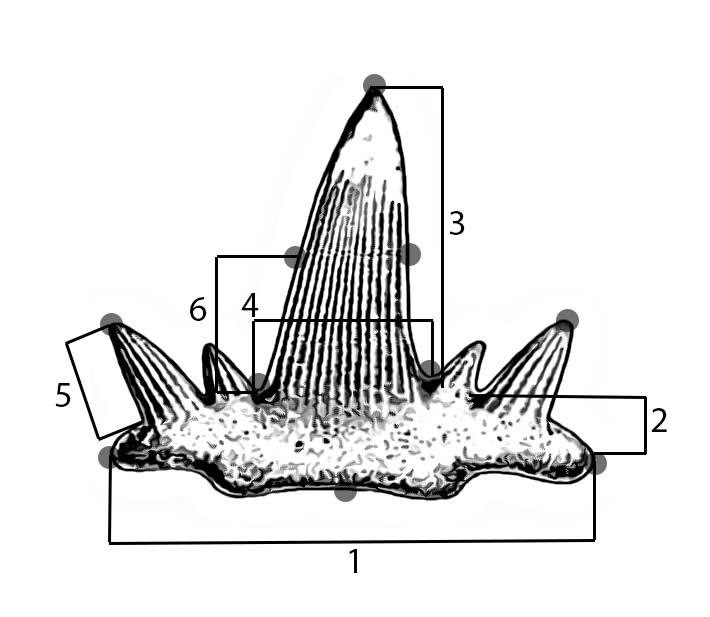