Paul Edmund Stanwick’s ‘Portraits of the Ptolemies. Greek kings as Egyptian pharaohs’ is a major new contribution to the scholarship of ancient Egypt. Stanwick was a student of Bothmer and thus had access to the massive amounts of research and photographs produced but not published by this late Egyptologist, formally referred to as the ‘Corpus of Late Egyptian Sculpture’, now in the archives of the Institute of Fine Arts at New York University. This book ‘Portraits of the Ptolemies’ finds its source in Bothmer’s vast and unpublished work, but Stanwick has moved beyond the work of his predecessor and many of Bothmer’s outdated methodologies into a contextual art historical study that bridges divides between the fields of Egyptology and Classical studies. Although obviously art historical in focus, the book is a true contextual work, and Stanwick attacks his research with every tool available to him: visual, textual, archaeological, architectural, glyptic and historical, providing a new and essential piece of research for studies of the Ptolemaic period.

The work is separated into eight chapters with two appendices. In chapter 1, entitled ‘A unique vantage point’, Stanwick provides a short historical introduction of the entire period as well as a useful review of the scholarly literature thus far, including discussion of Egyptologists Von Bissing (1914), Bothmer (1960), Bianchi & Fazzini (1988), and Josephson (1997), as well as Classicists Kyrieleis (1975) and Smith (1988, 1991). Stanwick’s aim is to “correct the imbalance” produced by the varying perspectives, prejudices, and methodologies of Egyptology and Classics. The main goal of this contextual approach is (p. 4) “to construct an Egyptological framework for understanding sculptures that have been predominantly viewed from a classicist perspective.” Read more... 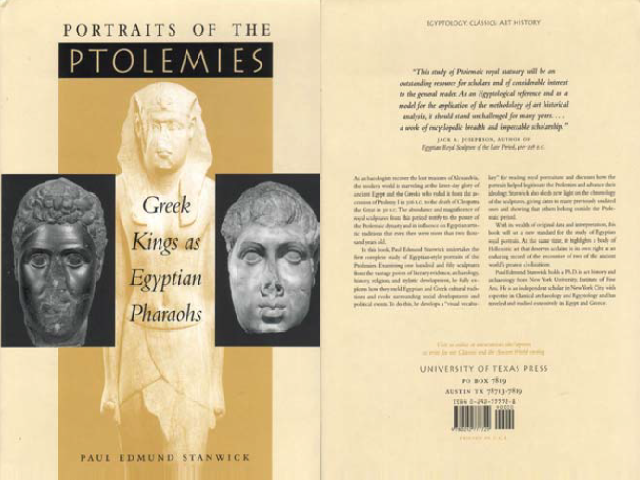