Public archaeology, a volume edited by Nick Merriman, explores the many faces of archaeology and its relation to the public in the contemporary world. The book grew out of a session of the 4th World Archaeological Congress in Cape Town (1999), with some of that session’s papers and other contributions making up the book, with a total of 16 contributors. The book’s basic concern is the interaction between the public and archaeology all over the world, including not just excavations, but also excavated materials in museums. Following an introduction by Merriman, the book is divided into two main parts: ‘Spreading the word: communication and interpretation’, and ‘In the public interest? The stakeholders’. Merriman’s introduction sums up the different practical and theoretical issues that effect archaeologists with regard to the public and the role(s) of archaeology in today’s world. He defines the different ‘publics’ and their interest/roles in interacting with archaeology. He also stresses communication between the different types of public and the archaeologists. The book then continues with essays relating to specific areas. Two specific essays focus on the United States. The first, by John Jameson Jr., traces the history of archaeology and the public in the United States from the 18th century onward, and the second, by Karolyn Frost, relates to education and archaeology in the U.S. These are followed by a more general paper by Merriman on archaeology, museums, and the public in England, with a paper by Sally MacDonald and Catherine Shaw on a specific museum’s experience, the Petrie Museum, following. The last three essays in this section all relate to how scholars can present their finds to the public in an accessible way. These include using the media, being used by the media, and exploiting the internet. Read more... 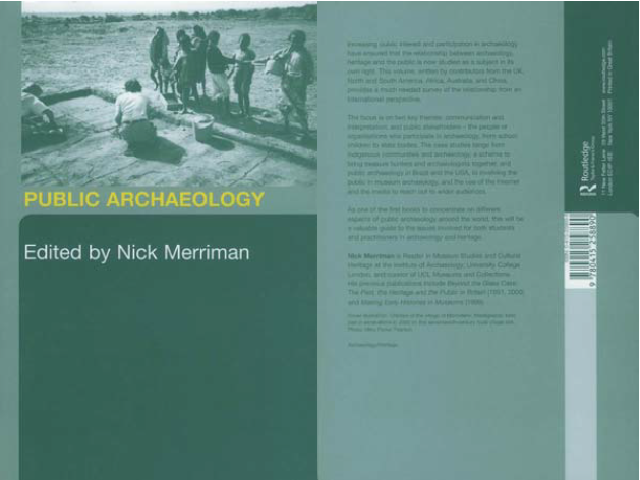